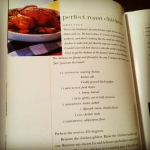 Last week, I found myself sitting on my couch in the crispy cold air of my new air conditioner watching the Food Network. The Barefoot Contessa was on and the topic was chicken. The first demonstration showed how to perfectly roast a chicken. Ina Garten pointed out that this particular recipe had been dubbed “engagement chicken” because some women at Glamour magazine had passed around this particular recipe amongst themselves and each woman became engaged after she had prepared it for her boyfriend.

Intrigued, I ran to my kitchen and picked up my copy of The Barefoot Contessa Cookbook. Sure enough, there was the recipe for roasted chicken that she had just made. The Spanish onions, the lemon, the garlic, the recipe for the gravy that looked seemingly effortless–engagement chicken at my fingertips.

Contessa, I realized one thing: this is a dish I need to know how to make. Because it’s a dish your wife would make. And it’s true, she would. Because she’s an adult and adults know how to cook adult things. I’m not even married, but I feel like if I want to be married I should know how to roast a chicken.

What a terrible thing to think. I can’t get married unless I know how to roast a chicken?! I can’t believe I even thought that. Why should I be depended on to cook the family dinner? It’s the 21st century, aren’t we over traditional gender roles? Can’t my future husband roast the damn chicken? Or maybe my future precocious 12 year old daughter could take on the task of cooking dinner, it seems right up her alley. Or maybe my future next door neighbor could invite us over for a monthly chicken roast. That sounds very kind and neighborly.

On the other hand, thinking of my future family, I also started to feel a little guilty because I find chicken carcasses to be disgusting. How can I roast them a chicken or a Thanksgiving turkey when the idea of putting my hand inside poultry makes me want to vomit? Who am I to deny my starving, protein-hungry future family of their succulent roast chicken dipped just because of my own bird carcass-touching shortcomings?

Despite the fact that I consider myself to be a modern woman and thus beyond the expectations of traditional gender roles, I still feel like it’s my duty to know how to roast a chicken. Gender roles aside, to me, there is nothing more satisfying than plopping down a fabulous dish in the middle of a table full of people like it ain’t no thang. Engagement chicken is the type of dish that not only woos diners, but also gives the cook a sense of accomplishment and satisfaction in his or her own cooking abilities. I always enjoy a good cooking challenge, so I think it’s time to overcome my fears and stuff a chicken carcass full of onion and garlic deliciousness.

5 thoughts on “Engagement Chicken, It’s A Meal Your Wife Would Make”