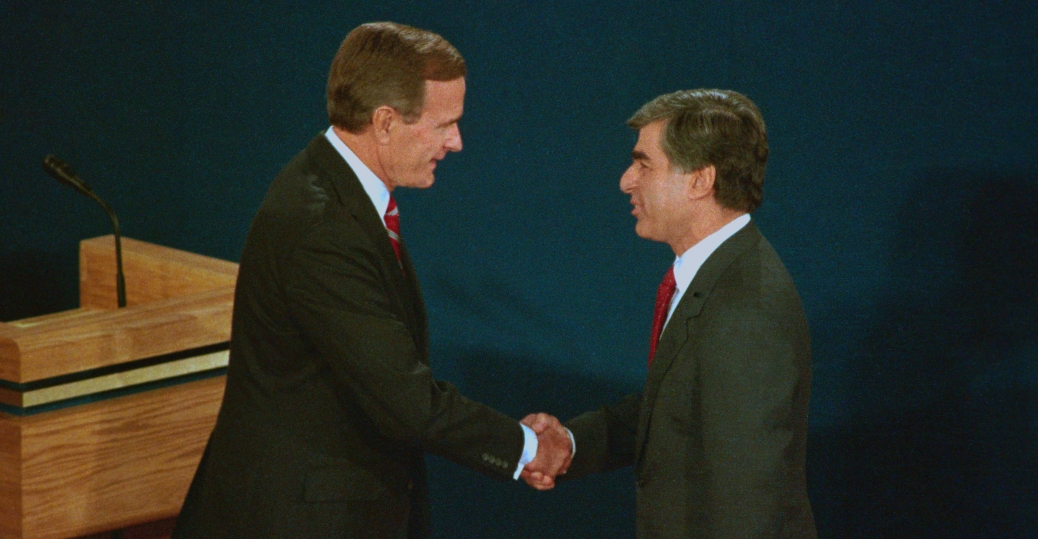 When I was in five-year old kindergarten, our teacher had us participate in a mock poll for the upcoming ’88 election. She set up a private voting area to simulate what the actual polls were like. All we had to do was cast our vote on the ballot provided to us by our Scholastic News Weekly Reader and place it into a desk.

Having no prior knowledge of the issues or who George H.W. Bush and Michael Dukakis were, I took a long hard look at the ballot, which had photos of both candidates, and tried to determine who looked more presidential. Ultimately, I decided that George H.W. Bush looked more presidential than Michael Dukakis, so I wrote an X next to his photo and placed my ballot into the desk. I remember feeling a sense of satisfaction after hearing Bush had won; I must’ve had an innate knack for determining outcomes of presidential elections.

Back then, as a five-year old, I had no idea what made someone qualified to be the president of the United States, so I based it on looks. If you look at the two men side-by-side, you’ll notice that Dukakis has darker features than Bush. By this time, I was already socialized to instinctively believe that a well-coiffed, Anglo-Saxon man made the best leader and would naturally fill the role of president. Unfortunately, too many of us still hold this same archaic belief–whether consciously or unconsciously–that to truly be qualified to be president, one must still be a white male.

Don’t believe me? Remember President Obama? How many times was he criticized for being under-qualified to be president despite the fact he held a law degree from Harvard? I don’t know about you, but I certainly want someone with a deep understanding of the law to be involved in the law-making process. Another criticism was that he wasn’t in the Senate long enough to run for president. Or how about the incessant requests for him to prove that he was born in the United States? Did anyone ask to see George Bush’s birth certificate? Or Bill Clinton?

So, people weren’t satisfied with a Harvard Law degree or a short stint in the US Senate. Then, what actually makes someone qualified to be the president?

Take Oprah. Oprah delivers an impassioned, intelligent speech at the Golden Globes and suddenly everyone is declaring that she is not qualified to run for the presidency of the United States despite the fact she has not even announced her candidacy.

A successful, intelligent, well-connected, empathetic, charismatic black businesswoman is not qualified to run for president? I’m not concerned about whether or not she’d make a good president; I’m deeply concerned at how quick people were to discredit her qualifications. The only true qualifications required to be a candidate for the presidency are you have to be 35 years of age, a natural born citizen, and a resident of the US for 14 years. Yet, we’re holding on to this false idea that to be president of the United States you have to somehow meet a magical set of rigorous requirements that never actually existed in the first place.

Just look at Hillary Clinton. Given her experience in foreign policy and tenure in the Senate, Hillary Clinton was extremely qualified to run for the presidency. However, people questioned her qualifications, too. Some couldn’t even see beyond her gender and believed that people were only voting for her simply because she was a woman and not her wealth of experience. Others didn’t want just another career politician in the White House especially not another Clinton. Some of these same naysayers are now urging the public to embrace Rep. Joe Kennedy III as a viable candidate for president. A Kennedy Democrat in politics? That is something I have never heard of before!

As we set our sights on Decision 2020, I urge us all to take a deep look at the unconscious biases that cloud our judgments of what makes someone qualified enough to run for the presidency of the United States. It’s time to rewrite the narrative so that someday, in the classrooms of tomorrow, when kindergartners are holding another mock election and some five year-old girl is looking at the pictures of the candidates on her ballot—what she deems to  “look presidential” does not resemble a well-coiffed, Anglo-Saxon male.

5 thoughts on “Who is Qualified to Run for President of the United States?”