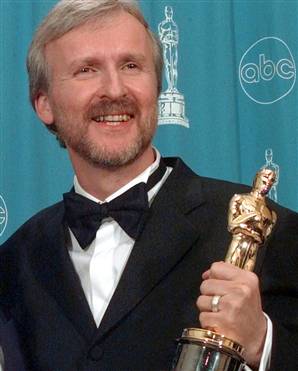 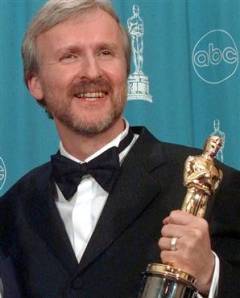 Just when I thought we were finished with director James Cameron for good, he returns from his hiding place to create and direct this year’s most talked about blockbuster, Avatar. Avatar has broken movie records while taking animation into the next dimension.  In addition, the film is up for a record amount of Oscars at this Sunday’s Academy Awards.  I haven’t seen Avatar, but I heard and read enough about the mind-boggling animation.

You know what else is mind-boggling? That Avatar has grabbed so many nominations. I never saw that one coming. I have a hard time with cartoon films–sorry animated pictures–earning Academy Awards. There. I said it. I don’t actually have a problem with animated movies, I’ve seen and loved many, but in theory I don’t take them as seriously as I should. It’s just that I equate animation with The Flintstones and Disney; I’m not looking to be challenged on a philosophical level by animation. I prefer to watch animation while lying around my house in my jammies, eating the kinds of snacks I only eat in the comfort of my own home .

Here’s another tidbit about this year’s Oscars that boggles my mind. In the Best Director category, James Cameron goes head to head with his ex-wife, the director of The Hurt Locker. James Cameron left his wife for an actress that was in his other film, you know that one about that ship that hit an iceberg…oh yeah, Titanic. There’s a lot riding on that award. If he wins it’s like, “Not only did I leave you high and dry for another woman who I find more attractive, but I am also a more talented director than you!” If she wins, it’s like, “Cheating men never prosper!” 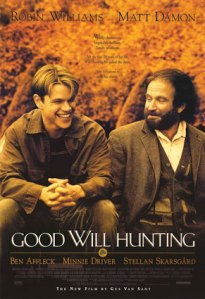 Speaking of Titanic, I miss those days. Not because I loved that movie, but because I loved that Academy Awards Show. The 70th Academy Awards is still my all time favorite awards show. As far as I’m concerned, it’s been all downhill since then.  That was the year Matt Damon and Ben Affleck became respected stars with their Best Original Screenplay win for writing my favorite movie of all time, Good Will Hunting. Robin Williams won Best Supporting Actor for a serious role, also in Good Will Hunting . Elliott Smith, one of my favorite singers who unfortunately took his own life in 2003, performed “Miss Misery,” which happened to be the theme from Good Will Hunting. Celene Dion punched her own chest in a fit of emotion while performing Titanic’s theme, “My Heart Will Go On.”  Helen Hunt won for As Good As it Gets then later divorced her husband, who happened to play her dog walker on Mad About You, thus starting the trend of Best Actress winners getting divorced.  The epic awards show that was the 70th Annual Academy Awards has ruined me for future Oscar telecasts. I am never completely satisfied when watching the Oscars.

In honor of this Sunday’s Oscars, here’s a video clip of Elliott Smith’s performance at the  Academy Awards:

6 thoughts on “King of the World (Again)”