Milwaukee, Wisconsin, where I currently reside, has four major news stations and one major newspaper, The Milwaukee Journal Sentinel. These local news sources, like every local news source across Wisconsin and now America, have been reporting on all of the latest developments of the budget protests in Madison, Wisconsin and providing up-to-the-minute information whenever possible. The protests started seven days ago and when they did, they were given some interesting labels by the local news.  The protests in Madison were referred to as “Mayhem in Madison,” “Madtown Frenzy” and “The Mad City Showdown.”

Mayhem in Madison? To me, the word mayhem implies absolute chaos, political unrest, anarchy, maybe even some weapons of mass destruction.

Madtown Frenzy? Referring to Madison by its affectionate nickname in this situation implies that everyone is running around crazy. Frenzy further implies a state of confusion.

I think the one that makes me laugh the hardest is referring to the events in Madison as “The Mad City Showdown.” It’s even fun to say. Mad City Showdown? Seriously?  This isn’t the wild west. Nobody is facing off at high noon, nobody is wearing spurs or ass-less chaps. The best part is that in the seven days of Madison protests, there have been zero arrests!

I am so tired of the way that the local news has been covering the events in Madison that I decided it was time to see the situation for myself. Well, that and I strongly believe in the cause and fully support unions and working families in Wisconsin.

When I arrived in Madison on Day 5 of the protests, the first thing that struck me was that life on the east side of the city (which is how you enter Madison when you drive from Milwaukee) was that people were going about their daily lives completely unscathed by the events at the Capitol. Some frenzy! 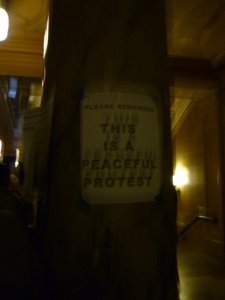 Secondly, the protests and rallies in and of themselves were peaceful. That was the whole point. There were even signs posted inside the Capitol reminding folks that “this is a peaceful protest.” The point of the rallies was for union members and supporters to have their voices heard and to stand together in solidarity. The people I encountered were warm, respectful, and passionate. Having the opportunity to voice my opinion inside the halls of our state’s Capitol along with thousands of other people who felt the same way was pretty powerful to say the least.

After witnessing the events first hand and then comparing them to the headlines and articles I  read, I am through consulting local news sources to find out what’s really going on in Madison, Wisconsin. I’ve stopped watching Milwaukee’s local news reports on Madison because their depiction of events in Madison versus my experience in Madison are complete opposites.

Instead, to find out what’s really happening in Madison, Wisconsin, I’m consulting scores of alternate news sources such as the Huffington Post’s live updates of events, eyewitness accounts on Twitter and Facebook, footage on YouTube, video montages like this one, and Mother Jones.

Anything other than the local news.

3 thoughts on “If You Want to Know What’s Going On in Madison, Wisconsin, Don’t Ask the Local News”